‘…the Baroque, classical sculpture, Greek mythology, parental ties, psychoanalysis…are sources of inspiration summarised in an installation that talks about my studies, my past, the things I love … basically, it talks about me.’

LONDON – To mark the return of Frieze and reopening of the art world this autumn, the old master dealer and owner of Trinity Fine Art, Carlo Orsi, is looking at historic art afresh by inviting the artist Francesco Vezzoli to re-imagine Baroque sculpture. It is Orsi’s first foray into contemporary art, in association with Vezzoli’s Italian gallerist Franco Noero. This collaboration has arisen out of the artist’s passion for the drama and emotion of Baroque art: he has created an installation based on the father-son relationship of Marquess Giovanni Corsi and his youngest son, Cardinal Domenico Maria Corsi, both carved by the 17th-century Roman artist Alessandro Rondoni (c.1644 – c.1710),  a contemporary of Bernini. Vezzoli plays a dual role here – both artist and curator – inserting his own work in dialogue with the two Baroque busts and reflecting on them in a dramatic mise-en-scene. 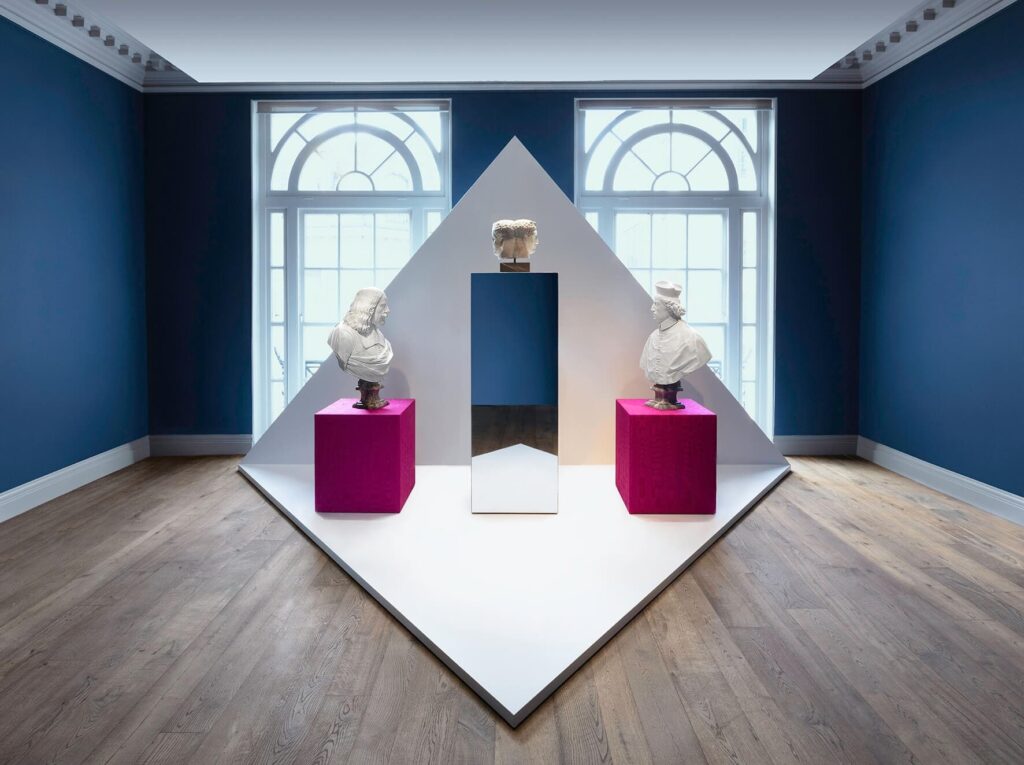 Orsi comments: ‘Rondoni’s work and career has fallen into relative obscurity compared with that of his contemporaries, although he was a popular artist in his time, and these two life-size portrait busts of father and son are special both for their exquisite quality and also for their provenance: they come directly from the Corsi family, in whose collection they remained for over 300 years. They were both commissioned in 1686 by the son, Domenico Maria Corsi, to celebrate his nomination as a cardinal and point back to his father Giovanni. They show off his lineage and yet also show that he had become a prince of the church and had surpassed his father and elevated the status of his family. It’s a complex intellectual story and a familiar one. I told Francesco about these pieces and he was fascinated. So I invited him to work with them – for me, it’s an exciting visual experiment.’ 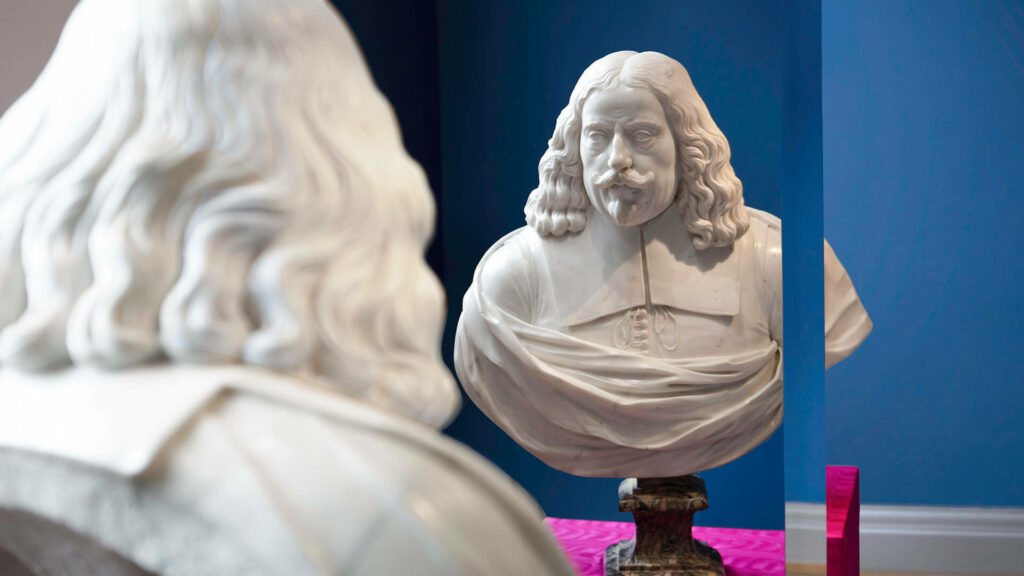 Vezzoli has long been drawn to the Baroque and comments: ‘I want to feel emotion and so I seek out the Baroque, where by Baroque I mean the historical style but also an emotional characteristic that is present in every age.’ The artist is particularly attracted to what he calls ‘the aura’ of Rondoni’s works: ‘I believe Rondoni is underestimated and deserves a little glamour… You just have to look at these busts to realise that Rondoni was extraordinarily skilled at breathing life into a piece of marble.’

Vezzoli’s installation creates a dialogue between father and son and reimagines their filial relationship by positioning the busts on new pedestals that he has designed and wrapped in scarlet moire silk from the Roman ecclesiastical tailors Gammarelli, purveyors to the Vatican since 1798. For Vezzoli, this symbolic colour of cardinals also enlivens the pure white marble sculptures with a camp, provocative spirit and sensuality. Between the busts of the two men, Vezzoli has placed an ancient Roman Janus head – an antiquity on which the artist has intervened to make one face new, while leaving the other in its time- worn original state. Janus – a god whose two faces look backwards and forwards – was invented by the Romans to preside over moments of transition: bridges, gates, the new year. Here, high atop his mirrored plinth, Janus’s double gaze reflects on old and new, father and son, our world and theirs. 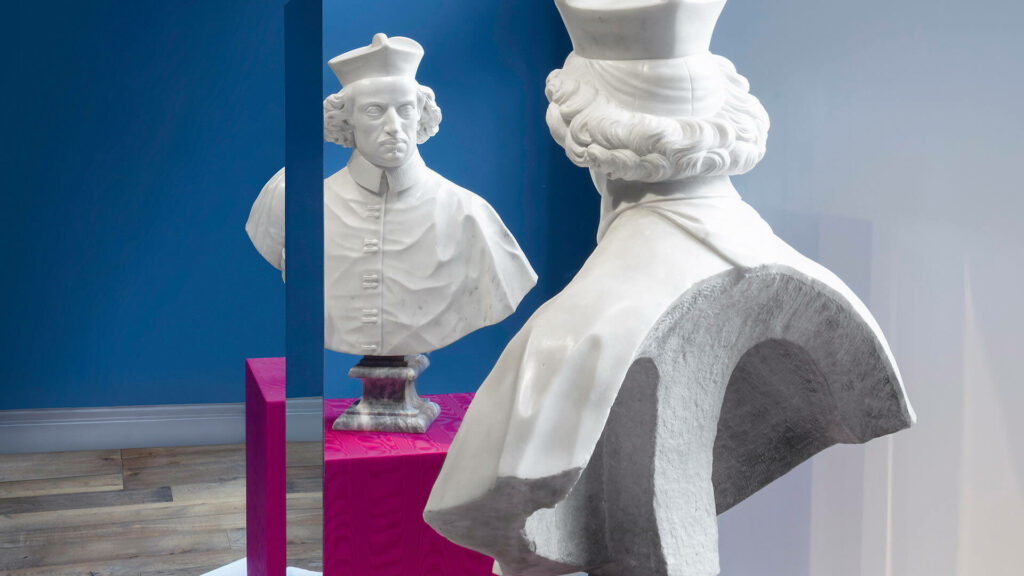 In this single-room installation on a specially made triangular set, Vezzoli creates a multi- layered mise-en-scene that plunges the viewer into a drama with no beginning or end. Instead, the work focuses on the act of looking itself, backward and forward, from a son to his dead father, back to antiquity and forward into our own space and time. The mute stones stand still but our eyes keep moving, searching out their stories and finding new connections with each look. For both Orsi and Vezzoli, this work invites viewers to come back into the gallery space and move around the installation to view it from all angles, reminding us of the visual, intellectual and physical pleasure of looking at art. 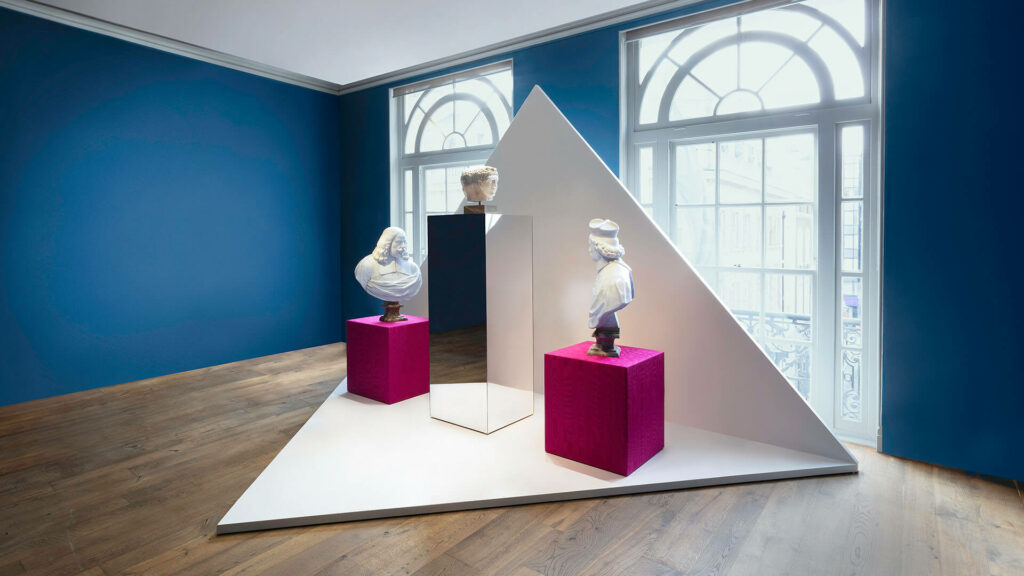 An artist known for combining the sensibilities of both a film director and a sculptor, Vezzoli’s work crosses film, fashion, pop culture and art and he frequently works with strong female figures, such as Catherine Deneuve, Eva Mendes, Cate Blanchett, and Lady Gaga. His installation at Trinity Fine Art marks the first time he has focused on examining the specifically male themes of the father-son relationship: ‘Exploring family ties, like exploring anything that is narrative and emotional … comes naturally to me. I think it’s an interesting challenge,’ says Vezzoli. ‘In addressing this theme … I tried to highlight the father-son dynamic in the title. For me, the relationship between classicism and the art of the past is clearly a search for the absolute and bonds with parents are always there.’

The exhibition is accompanied by an illustrated catalogue, featuring a dialogue between Francesco Vezzoli and Professor Andrea Bacchi, a leading expert on Bernini and the Baroque, and Director of the Fondazione Federico Zeri at the University of Bologna.

Established in 1984, Trinity Fine Art has earned a reputation as a leading destination for exceptional works of art and has gained the respect and loyalty of clients and colleagues for the rigour, attention, and discretion of service. As a dealer and consultant specialising in Old Master Paintings, Sculpture and Works of Art from the Renaissance to the 19th century, we work with clients who include many of the world’s major museums, as well as most leading private collections.

In 2016, ownership of Trinity Fine Art passed to Carlo Orsi, one of the most respected art dealers in Italy and President of the Amici di Brera Onlus. Based in elegant premises at 15 Old Bond Street, London, the gallery provides a relaxed atmosphere in which to view works of art and holds regular exhibitions. We exhibit at the principal art fairs, as well as loaning to museums and sponsoring and supporting institutional exhibitions and publications, whilst also publishing our own scholarly catalogues. This approach directly reflects Carlo Orsi’s deep commitment to scholarship and research and his belief in the crucial role that galleries have in today’s cultural landscape.

Founded in Turin in 1999, in via Mazzini 39, the gallery distinguished itself from the very start for its courageous and significant exhibition projects crossing all artistic languages, while maintaining a particular attention to conceptual practices and to the radicality of research. Over the years, its program has maintained a constant evolution and growth, accompanied by the migration to eight different spaces in the city: a response to different architectural and planning needs, which has left artists free to create new projects in different places.

In 2003 the gallery added its main space in via Giollitti 52A and in March 2008 the gallery moved to the historical building known as ‘Fetta di Polenta’, designed by Alessandro Antonelli. Since 2013, its base has been Via Mottalciata 10, in the northern part of Turin, which added a large open-air space in September 2020. Alongside the organization of exhibitions in its own spaces and participation in major international fairs, the gallery collaborates with the most important Italian and international institutions, as well as with the city itself, promoting the publication of books and supporting and contributing to the production of works and projects by its artists. 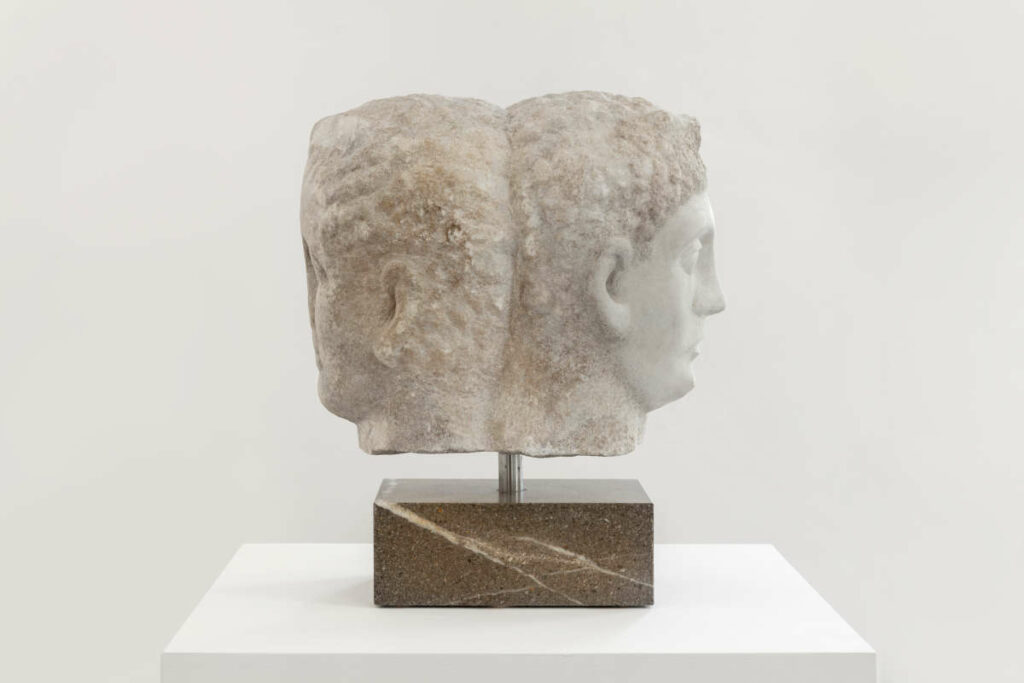 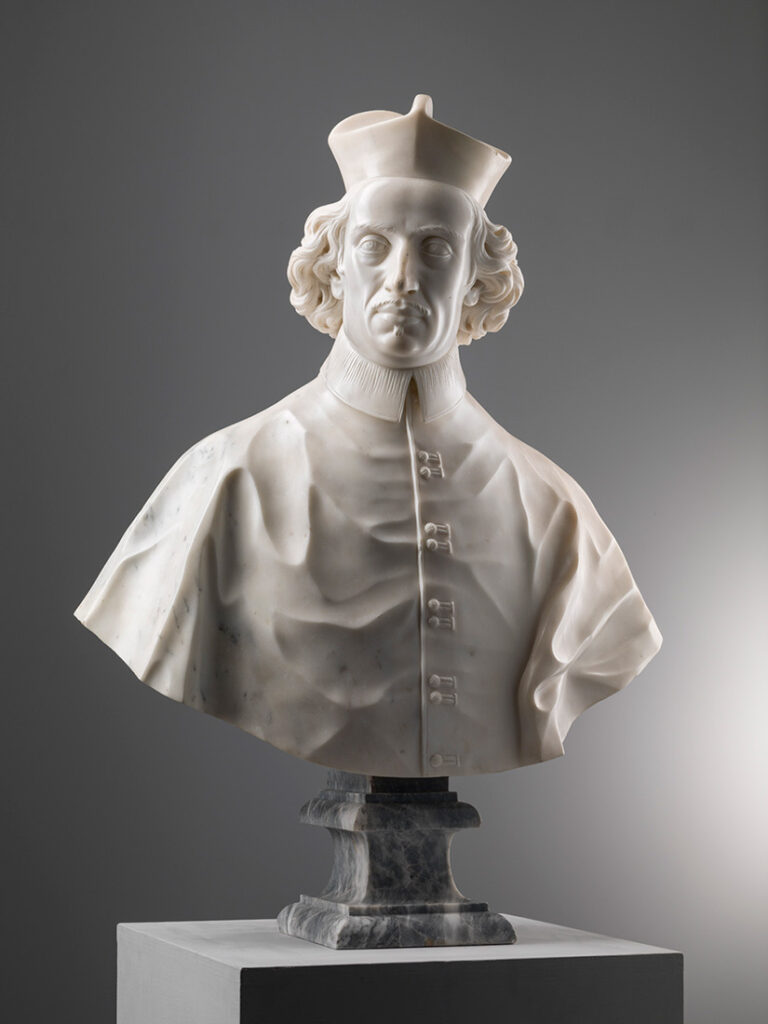 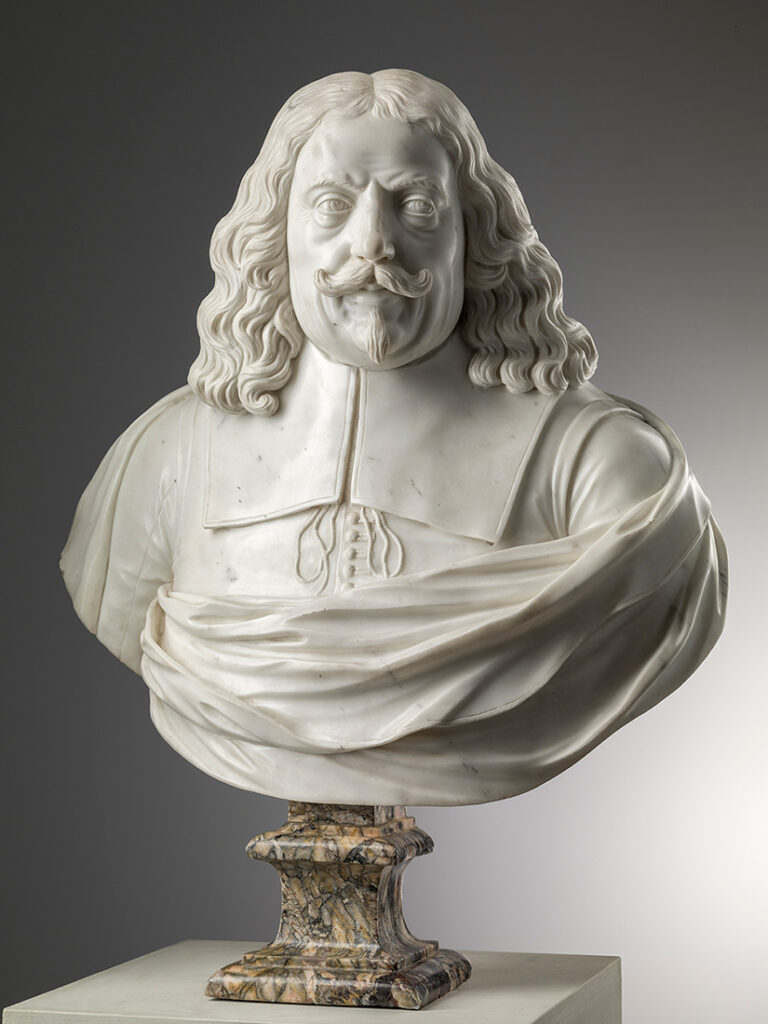